This week’s style series features Nick Lewis. Nick is a husband, a father, a student (Go Lumberjacks), and he has a full time job. Woah.  Honestly, I’m exhausted just thinking about all of those roles. Nick might actually be our most surprising Pup Tees by Project PAL supporter to-date. Why? Well, because Nick is not exactly an enthusiastic, over-the-top dog lover.

I know…this was my face when I first found out too.

Here’s the great thing about Pup Tees and about Project PAL in general…you don’t have to be an avid volunteer, or a die-hard dog lover to support this simple project. All you have to do is, get a Pup Tee, and wear it. Then, you’re already doing more than most people for the cause!

Although Nick was not raised around dogs (nor does he have a dog of his own) his mother-in-law is constantly reminding him that her grandchildren will need a dog some day.

It is honestly possible that his MIL will show up on their doorstep with one here in the near future! But until then, Nick’s #1 dog is Penny. Penny, also known as “Penny Perfect”, is a golden lab mix that lives the ultimate dream. Although Nick only sees her a couple times a year, she has quickly become his one and only favorite dog. Meet Nick & Penny:

Nick lives in Gilbert, AZ with his wife, Sara (who generously designed our OG Pup Tee design for us!), and their baby, Heath! When Project PAL was nominated for Best of our Valley – Best Pet Instagram, Nick was one of our most valuable/dedicated voters. He was literally worth like 10 votes per day. When we didn’t win (we still won AFM Fave so, we’ll take it), it about crushed him because of his investment in the contest. Sara and I joke around that even though Nick doesn’t swoon over cute dog pictures, he has, by transitive property (if A=B, and B=C, then A=C) become a great supporter of the Shelter Dog Program! If you’re trying to do the math there A= Nick, B= Kim, C= Dogs.
We weren’t sure if Nick would proudly rep his Mutt Life shirt, or if he was just going to pretend he liked it to make us feel better about life.  Turns out, he loves to wear this shirt because it is one of the most comfortable shirts he owns. Nick has been hitting the gym every weekday at 5am (so effing early. Serious props on the dedication). When we were talking about how Nick wears his shirt and why….the direct quote from Nick is that he likes to wear it to workout because it “accentuates the bis and tris”..so if you are on the fence about getting yourself a Mutt Life shirt, get off the fence. This shirt flatters the arms. Not only is the fabric crazy soft, but it looks good too!
From Nick’s wife, Sara:
The Mutt Life tee is the perfect combination – it supports a good cause AND looks and feels great. If Nick had a choice, he would wear casual shorts every day of the week. Living in Arizona, there are very few days that call for long pants. He will go to an outdoor event in 55 degree temperatures and still choose to wear shorts (and most likely flip flops). Rarely anything touches his feet that isn’t Nike or Nike subsidiary. Pictured here, Nick is in one of his favorite pairs of shorts with his Mutt Life tee. The perfect outfit to be comfortable and still have the flexibility to chase a 10 month old baby while playing fetch all at the same time. Can you say multitasking dad/future shelter dog dad? 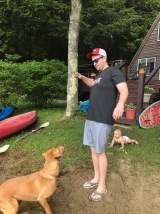 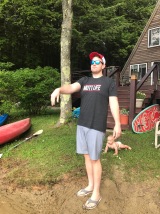 Also, we are LOLing at baby Heath in these pics.  Honestly NOT sure who is more excited about fetch….Penny the pup or Heath. Let us zoom in for your viewing pleasure:

So, at the end of the day, we hope the big takeaway for you here will be that Pup Tees are for everyone.  They are for those of us who swoon over every dog, every time.  And those of us are still warming up to the idea of getting a dog for their family. (Totally kidding about the no soul thing….to each his own, but still get you a Pup Tee either way).
❤ ❤ ❤ ❤ ❤