This week’s PAL is for Ronald! He is a fun loving fella with an outgoing personality! When we saw his face, we thought our eyes were deceiving us when we saw that he has been at the MCACC East shelter since APRIL! So naturally, I had to pick him after reading about his adorable poised personality for his day foster outing!

Ronald is a red and white American Pit Bull Terrier mix about a year and a half old. Don’t let his young age fool you…he knows how to impress guests once he is out of the shelter environment.  His day foster took him everywhere with them and said did very well in the car everywhere they went.  He patiently “sat in the back seat and watched quietly wherever we drove.” I imagine he had his head out the window with his tongue and ears flapping in the wind…much like Chance from Homeward Bound…did someone say “nanananaaaa Bat Dog!”

During his outing, Ronald got to enjoy a long walk at the park (hey a dog can dream right?).  There was lots of excitement at the park, people, children, other dogs and Ronald was interested, but calm. Sir Ronald walks well on a leash, “by the end he was walking close to me with a slack lead. Great for a 1 year old guy!”

The last stop on his wonderful day trip was a stop by PetCo; Ronald got to pick out his own toy, and was calm and relaxed in the store. Pretty impressive for a younger fella! He was handsomely rewarded with a Starbucks Puppaccino and a nice cold bath. Needless to say, Ronald has it all. He is eager to please and definitely tries to impress you when you take him out! So why not swing by the MCACC East shelter to arrange a meet and greet to see if Ronald is the pup for you? His ID# A3750815 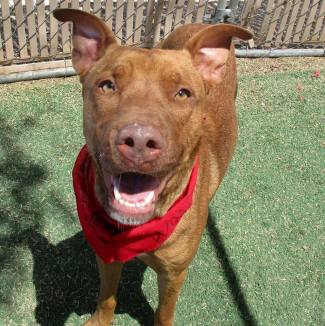 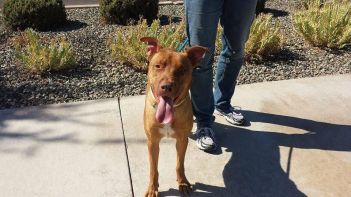